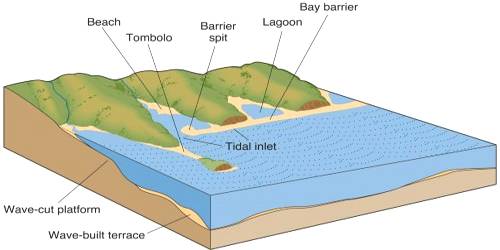 A ridge of sand and shingle formed in the sea in the off-shore zone (from the position of low tide waterline to seaward) lying approximately parallel to the coast is called an offshore bar. An off-shore bar which is exposed due to further addition of sand is termed a barrier bar. The off-shore bars and bathers commonly form across the mouth of a river or at the entrance of a bay. Sometimes such barrier bars get keyed up to one end of the bay when they are called spits (Figure). 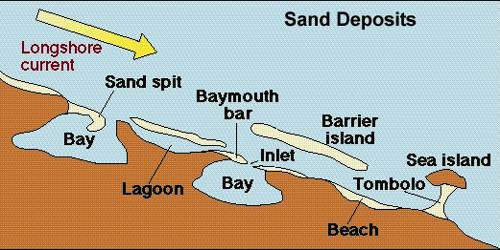 Spits may also develop attached to headlands/hills. The barriers, bars, and spits at the mouth of the bay gradually extend leaving only a small opening of the bay into the sea and the bay will eventually develop into a lagoon. The lagoons get filled up gradually by sediment coming from the land or from the beach itself (aided by wind) and abroad and wide coastal plain may develop replacing a lagoon.