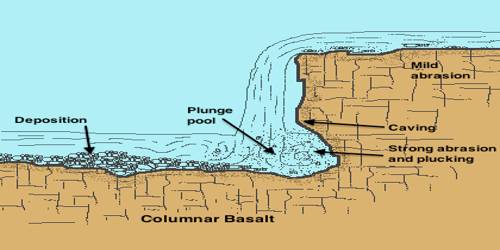 Over the rocky beds of hill-streams more or less circular depressions called potholes to form because of stream erosion aided by the abrasion of rock fragments. Once a small and shallow depression forms, pebbles, and boulders get collected in those depressions and get rotated by flowing water and consequently the depressions grow in dimensions. Potholes are cylindrical holes drilled into the bed of a river that varies in depth & diameter from a few centimeters to several meters. They’re found in the upper course of a river where it has enough potential energy to erode vertically and its flow is turbulent. 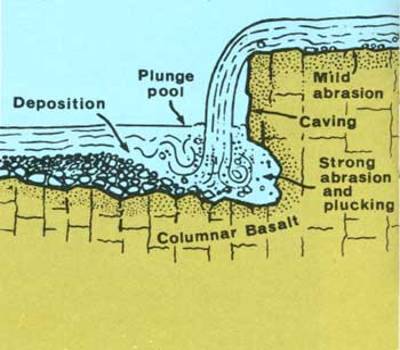 In the upper course of a river, its load is large and mainly transported by traction along the river bed. When flowing water encounters bedload, it is forced over it and down cuts behind the bedload in swirling eddies currents. These currents erode the river’s bed and create small depressions in it.

A series of such depressions eventually join and the stream valley gets deepened. At the foot of waterfalls also, large potholes, quite deep and wide, form because of the sheer impact of water and rotation of boulders. The overland flow causes sheet erosion and depending upon the irregularities of the land surface, the overland flow may concentrate on narrow to wide paths. Such large and deep holes at the base of waterfalls are called plunge pools. The rapidly moving water then moves to the softer layer below and begins to wear away or erode that softer layer, creating a plunge pool. These pools also help in the deepening of valleys. Once a valley is formed, it later develops into a stream or river. During the sheet erosion, minor or major quantities of materials from the surface of the land are removed in the direction of flow and gradual small and narrow rills will form. Waterfalls are also transitory like any other landform and will recede gradually and bring the floor of the valley above waterfalls to the level below.