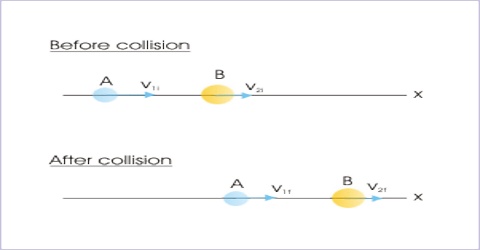 Here action force applied on the body of mass m2 is F1 and the mass m2 also creates reaction force F2 on m1.

Again, suppose if the duration of the action and reaction is t,

According to Newton’s third law of motion,

During collision the action and reaction forces act for the same duration.

Suppose, the two bodies move along the same straight line, before and after the collision, with velocities v01 and v02 respectively. Due to action and reaction, accelerations of the two bodies become a1 and a2.

According to the principle of conservation of momentum,

Momentum before collision = Momentum after collision.

This is the equation of one-dimensional collision.