To place a satellite at a height of 300 km, the launching velocity should at least be about 8.5 km s-1 or 30600 kmph If this high velocity is given to the rocket at the surface of the Earth, the rocket will be burnt due to air friction. Moreover, such high velocities cannot be developed by the single rocket. Hence, multistage rockets are used.

To be placed in an orbit, a satellite must be raised to the desired height and given the correct speed and direction by the launching rocket (Figure).

At liftoff, the rocket, with a maimed or unarmed satellite on top, is held down by clamps on the launching pad. Now the exhaust gases built—up to an upward thrust which exceeds the rocket’s weight. The clamps are then removed by remote control and the rocket accelerates upwards. 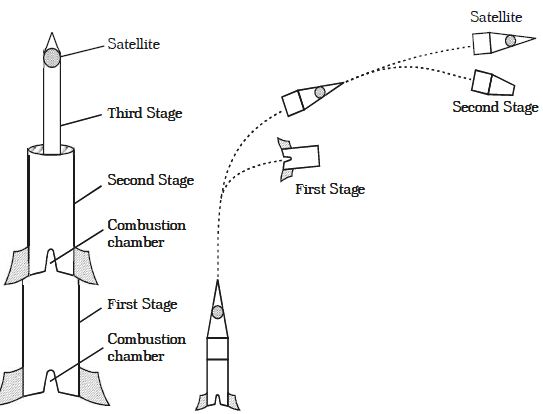 To penetrate the dense lower part of the atmosphere. initially, the rocket rises vertically and then tilted by a guidance system. The first stage rocket, which may burn for about 2 minutes producing a speed of 3 km s-1. lifts the vehicle to a height of about 60 km and then separates and falls back to the Earth.

The vehicle now goes to its orbital height, say 160 Ian, where it moves horizontally for a moment. Then the second stage of the rocket fires and increases the speed that is necessary for a circular orbit. By firing small rockets with the remote control system, the satellite is separated from the second stage and made to revolve in its orbit.