Spirogyra reproduces by the following three ways, such as-

Process: Two heterothallic filaments bearing different gametes, come close to each other parallelly and they are covered with a gelatinous membrane. 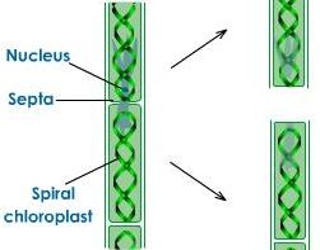 i) This time, due to dehydration, protoplasm contracts, giving rise to gametes of similar structure

Process: Lateral conjugation occurs in two ways, such as-

I) Direct type of lateral conjugation

i) Any side of the partition wall of two cells remaining side by side of the same Spirogyra filament, breaks down forming a passage called conjugation tube.

ii) During this time, the protoplasm of the two adjacent cells participating in conjugation contracts by losing water to form two different gametes