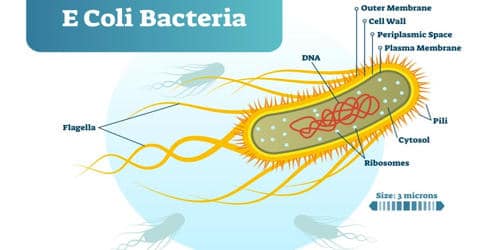 Escherichia coli (E. coli) bacteria normally live in the intestines of people and animals. Most E. coli are harmless and actually are an important part of a healthy human intestinal tract.

(3) Scientists use E. coli to work with DNA and proteins from other organisms. Some sorts of E Coli bacteria are used in preparing recombinant D.N.A By this, different hormones, vaccines, and medicines can be made (e.g. Hunun insulin)

(4) Normally they do not cause any disease in the intestine. But some species of bacteria, in the special condition, cause disease in the human body, such as- Diarrhea of children, Septicaemia. Peritonitis, Meningitis, Pneumonia, Urinary tract infection, etc. However, some E. coli are pathogenic, meaning they can cause illness, either diarrhea or illness outside of the intestinal tract.

(5) The presence of them in food and water indicates the pollution of food and water. It is a normally harmless bacteria that live in the lower intestine though some strains of this bacterium can cause infection of the intestine, urinary tract, and other parts of the body.

(6) Some of E Coli bacteria live on the root nodules of certain plants, for example, peas, beans and clover, and are able to ‘fix’ atmospheric nitrogen into a form that can be absorbed by the plant as a fertilizer.

(7) They are used in preparing antibiotics in laboratories.

Escherichia coli (E. coli) is a bacterium that occurs naturally in the intestines of people and animals. There it provides protection against harmful bacteria. However, some strains can cause food-borne infections. Even though E. coli has a bad name, this bacterium is still very useful to us. In the large intestine, it prevents the uncontrolled growth of harmful bacteria. It can also cause infections outside the intestine if the intestine is torn or damaged—for example, by an injury or a disorder, such as inflammatory bowel disease.

Describe the Structure and Habitat of an E.coli Bacteria