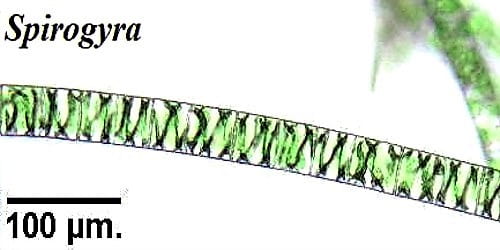 Spirogyra is any of a genus of freshwater green algae with spiral chloroplasts. It measures around 10 to 100μm in size and might stretch centimeters long. It is extensively dispersed and found all through the world. It has about 300 species. These cells have one or more attractive spiral chloroplasts, so they appear dark green. It is found in fresh water. It grows as free-floating mass. Therefore, it is usually called pond scum.

Thousands of Algal species are found in this world. They have diversity in shape, size, and structure, but all of them contain different photosynthetic pigments and thus they are autotrophic.

A short description of Spirogyra, as a representative of algae, is stated there.

Structure: They are green, unbranched filamentous algae. Their chloroplasts are band-shaped, spirally arranged in the cell. The name- Spirogyra comes from this spiral chloroplast. It regularly grows in freshwater sluggish reservoirs. Each filament is unbranched and consists of cylindrical cells placed end to end. The cell wall is made up of an external layer of pectin and an internal layer of cellulose. The internal surface of the cell wall is lined with a thin layer of cytoplasm.

There are pyrenoids in the chloroplasts. The vegetative cells are elongated and each cell contains a well-organized nucleus and a large vacuole. Their body is slippery and the cell wall is three-layered. 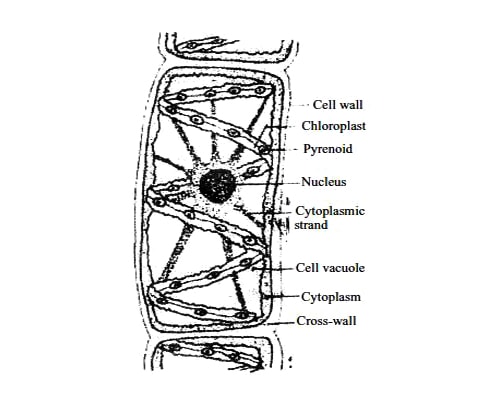 Fig: A portion of spirogyra

A thread of Spirogyra consists of a filament of tiny cells bounded by a layer of mucilage or slime. Each cell has a middle vacuole and a prominent nucleus that is floating by thin strands of cytoplasm that are attached to the internal division of the cell wall. All of the cells look alike and all of them act as individual organisms. The cells are long and thin, and each spirogyra filament measures between 10 to 100 micrometer in width. No cell has any particular function such as is found in higher plants and animals. Sometimes, these filaments expand root-like structures for attaching themselves to the substrate.

Reproduction: Sexual reproduction occurs by the process of conjugation. They also reproduce by fragmentations (Filament break up into short pieces and each part grew into a new filament or by spore formation.

Fragmentation is the general process of vegetative reproduction in Spirogyra. It breaks the filament into 2-3 cell portions. Each portion germinates to produce a new plant.

Sexual reproduction is isogamous. It takes place by conjugation of non-flagellated gametes. Conjugations may be of two types: the scalariform conjugation and the lateral conjugation.

Identifying features of Spirogyra are:

The most perceptible characteristic of the cell is the spiral chloroplast containing the green chlorophyll. There might be more than one chloroplast and their shapes might help to recognize the various species.

Importance of Spirogyra: It is an important source of fish food. It may also be used for human food through special processing. It is commonly found in clean water and it produces food through the process of photosynthesis. It plays a great role in the natural food cycle.

What do you mean by Fungi Imperfecti?