Home Biology The Characteristics and Habitat of Plant Spirogyra 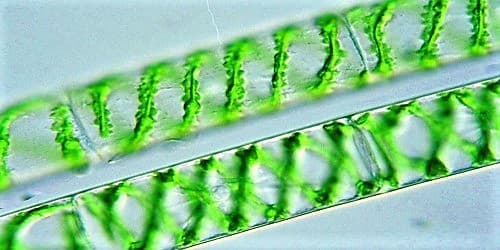 Spirogyra is a group of green algae that belong to the order Zygnematales. It is green algae having a filamentous formation, which measures about 10-100 micrometer in width. It grows in fresh water as free-floating accumulation and thus generally called pond scum. It is accomplished of both sexual and asexual reproduction.

(a) Spirogyra occurs in freshwater bodies such as ditches, ponds, lakes, etc. It measures about 10 to 100μm in size and might stretch centimeters lengthy.

(b) Spirogyra is a green alga having a filamentous, unbranched, multicellular and threadlike structure. It is commonly called water silk or pond scum because of the slippery touch of its thread-like filaments.

(c) They are unbranched and plant body is composed of multicellular and tubular or rectangular cells. The cell wall is two layered and is made up of cellulose and pectin. Pectin dissolves in water and makes the filament oily to touch.

(d) The plant body is filamentous and they arc autophytic due to the presence of chlorophyll. It is multicellular filamentous green alga covered by a mucilaginous sheath. Each filament is unbranched and consists of cylindrical cells placed end to end. Each filament has a large number of rectangular (length being more than breadth) cells.

(e) The cell wall is made of cellulose. Cytoplasm lies in the periphery of cell enclosing a vacuole in the center. The cytoplasm has a large vacuole at the center and 1-16 ribbon-shaped, spirally coiled chloroplasts.

(f) Vascular tissue is absent. Each cell has two parts: the thick, two-layered cell wall (outer wall made up of pectin and the inner wall is cellulosic) and the protoplasm.

(g) Reproduction occurs through vegetative and asexual methods. Sexual reproduction occurs either by scalariform or by latera conjugation method. Alternation of generation is clearly found in their life cycle.

Left: extreme macro view of a single bubble from the image.]

The habitat of Spirogyra:

Spirogyra is the most dissimilar of all the conjugating green algae. During the rainy period, a filament of spirogyra forms green appearance in the stagnant water. You can find this jumbled life form is freshwater nonaligned or vaguely acidic pH ponds, lakes, and slow-moving streams and rivers.

This organism is characterized by its filamentous arrangement and the spiral arrangement of its chloroplasts. The plant body is thallus. Type of thallus is filament which consists of many cells arranged in uniseriate mode i.e. arranged in such a method that one cell appears above another. It often grows in short-lived temporary ponds that assemble up throughout wet weather and dry up in a while subsequently. The filament is enclosed by mucilage layer which makes plant body slippery and prevents from decaying. Each of the filaments is elongated, multicellular, cylindrical, unbranched silk-like or thread-like.