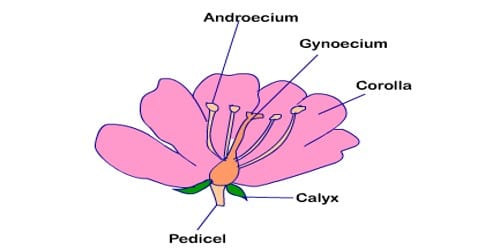 The androecium is composed of stamens. It is the male reproductive part of the flower. Each stamen which represents the male reproductive organ consists of a stalk or a filament and an anther. Each anther is usually bilobed and each lobe has two chambers, the pollen-sacs. It contains anther and filament and produces pollen grains or male gametes. The pollen grains are produced in pollen-sacs. A sterile stamen is called staminode. Stamens of flower may be united with other members such as petals or among themselves.

The Parts of the Androecium – An androecium is usually made up of multiple stamina; each is composed of two parts, the filament, and the anther.

Flowers are made up of both reproductive and non-reproductive structures arranged in four whorls. These include the calyx, the corolla, the gynoecium, and the androecium. When stamens are attached to the petals, they are epipetalous as in brinjal or epiphyllous when attached to the perianth as in the flowers of lily. 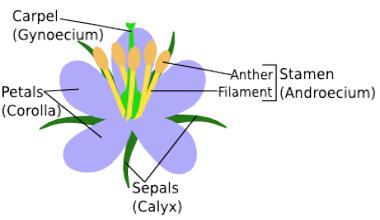