The Pteridophytes include horsetails and ferns. Pteridophytes are used for medicinal purposes and as soil-binders. They are also frequently grown as ornamentals. Evolutionarily, they are the first terrestrial plants to possess vascular tissues- xylem and phloem.

The pteridophytes are found in cool, damp, shady places though some may flourish well in sandy-soil conditions. However, in pteridophytes, the main plant body is a sporophyte which is differentiated into true root, stem and leaves (Figure). 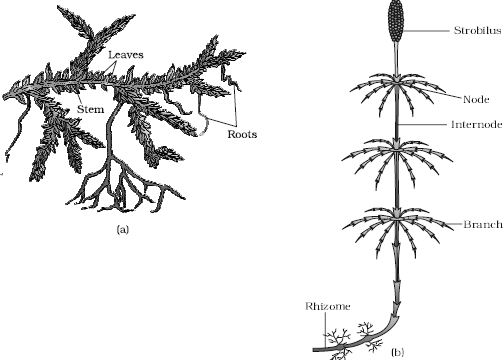 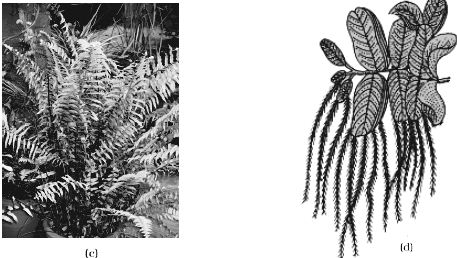 These organs possess well-differentiated vascular tissues. The leaves in Pteridophyta are small (microphylls) as in Selaginella or large (macrophylls) as in ferns. The sporophytes bear sporangia that are subtended by leaf-like appendages called sporophylls. In some cases sporophylls may form distinct compact structures called strobili or cones (Selaginella, Equisetum). The sporangia produce spores by meiosis in spore mother cells. The spores germinate to give rise to inconspicuous, small but multicellular free-living, mostly photosynthetic thalloid gametophytes called prothallus.

In majority of the pteridophytes all the spores are of similar kinds: such plants are called homosporous. Genera like Selaginella and Salvinia which produce two kinds of spores, macro (large) and micro (small) spores. are known as heterosporous. The megaspores and microspores germinate and give rise to female and male gametophytes, respectively. The female gametophytes in these plants are retained on the parent sporophytes for variable periods. The development of the zygotes into young embryos take place within the female gametophytes. This event is a precursor to the seed habit considered an important step in evolution.