As the stem continues to increase in girth due to the activity of vascular cambium, the outer cortical and epidermis layers get broken and need to be replaced to provide new protective cell layers. Hence, sooner or later, another meristematic tissue called cork cambium or phellogen develops, usually in the cortex region. 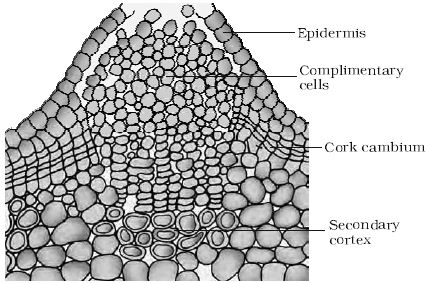 The cells of secondary cortex are parenchymatous. Phellogen, phellem, and phelloderm are collectively known as periderm. Due to activity of the cork cambium, pressure builds up on the remaining layers peripheral to phellogen and ultimately these layers die and slough off. Bark is a non-technical term that refers to all tissues exterior to the vascular cambium, therefore including secondary phloem. Bark refers to a number of tissue types, viz., periderm and secondary phloem. Bark that is formed early in the season is called early or soft bark. Towards the end of the season late or hard bark is formed. Name the various kinds of cell layers which constitute the bark.

Difference between Diffusion and Osmosis