Home Physics What is Real Image?

A real image is an image which is focused in the plane of convergence for the light rays that actually from a given object. If a convergent beam is an incident on a plane mirror, the reflected rays pass through a point I in front of M, as shown in the Figure. In a real object (divergent beam) gives rise to a virtual image. In the Figure, a virtual object (convergent beam) gives a real image. Hence plane mirrors not only produce virtual images for real objects but also produce Real images for virtual objects. 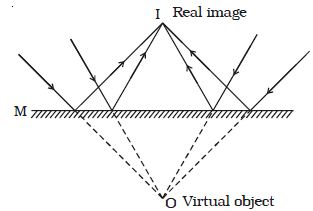 How to Measure Power of a Lens

Define Plane of Vibration and Plane of Polarization