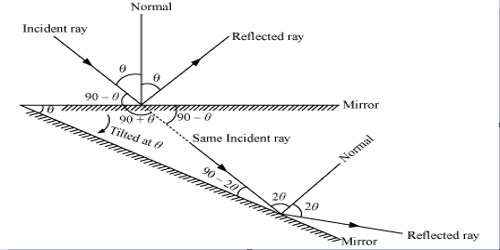 A ray of light is the path along which the lights travel. Rays are observable. They travel along the straight line in a similar homogeneous medium and are represented by straight lines with arrowheads. The arrowhead indicates the path of light. Consider a plane-mirror and a fixed incident ray of light reflecting from the surface at an angle θ. Before the mirror has rotated, the angle of incidence is θ as is the angle of reflection.

Deviation of Light due to Rotation of a Mirror: Let consider al ray of light AO incident on a plane mirror XY at O. It is reflected along OB. Let α be the glancing angle with XY (Figure). We know that the angle of deviation COB = 2α. 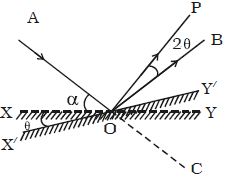 Suppose the mirror is rotated through an angle O to a position X’Y’.

For the same incident ray, when the mirror is rotated through an angle, the reflected ray is rotated through twice the angle. If an object is positioned between two plane mirrors disposed at an angle θ, then the number of images formed is n = (360º/θ) – 1.