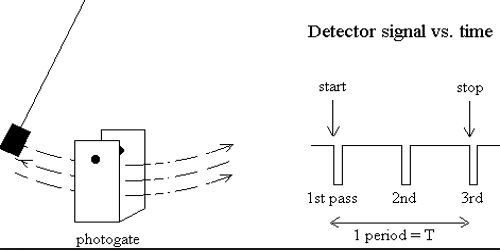 Measurement of time by simple pendulum

One type of clock can be made by pendulum to measure time. It is known as pendulum clock. The time period of this clock is 2 seconds. In every half oscillation i.e., in every 1 sec, it gives a beat. This pendulum is made of metal. Its length changes with temperature. During winter its length decreases and during summer its length increases. We know, the time period is directly proportional to square root of length. So during winter the time period of the pendulum clock decreases and hence it goes fast. On the other hand, during summer the time period increases, hence the clock goes slow. So, time period is adjusted by a screw placed at the bottom of the bob. By adjusting the screw the bob can be raised or lowered and thus effective length of the pendulum is adjusted so that it gives correct time period i.e., 2 seconds. The value of g becomes less on the top of a high hill or under the ground.

Here, time period of pendulum becomes more on the hill and also under the ground. That means, a clock goes slow. The value of g is less in the equator and it is more in the polar region. So, if a wall clock is taken from the equator to the polar region it goes fast. 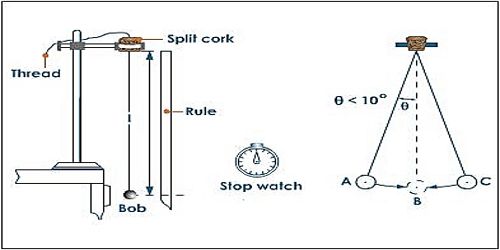 In the lab, we will use a photogate timer to make very exact measurements of the period T of a simple pendulum as function of the length L and the amplitude θ0. A photogate consists of an infra-red diode, called the source diode, which emits an invisible infra-red light beam. This beam is detected by another diode, the detector diode. When the mass m passes between the source and the detector, the infra-red light beam is interrupted, producing an electronic signal that is used to start or stop an electronic timer. In “period mode”, the timer starts when the mass first passes through the gate, and does not stop until the mass passes through the gate a third time, as shown below. Thus the timer measures one complete period of the pendulum. Our timers are quite precise and read to 10-4 s = 0.1 msec. Pressing the “reset” button sets the timer to zero and readies the timer for another measurement.

Experiment: Comparing the Masses with the help of Spring