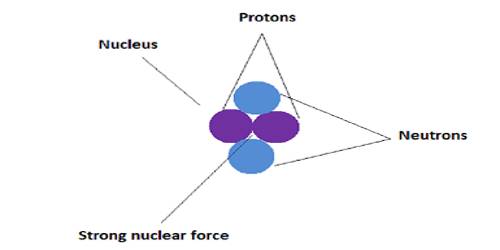 A nucleus of an atom is composed of protons and neutrons. These are combined called nucleons. Since similar positively charged protons remain very close to each other, hence Coulomb’s repulsive force between them should be very strong and consequently, the nucleus should have broken. In reality, many nuclei are stable and the existing nuclear force does not allow the nucleus to break. The gravitational force that is active between the nucleons is so negligibly small that it cannot balance the Coulomb’s repulsive force. So, there must exist a strong nuclear force which holds the nucleus together. This force is called strong nuclear force. Scientists think that by the mutual exchange of a particle named meson inside the nucleus this force becomes active. This force is attractive and is not effective outside the nucleus. That means this force is effective within short range. This force is attractive and independent of charge.

Pressure due to a Liquid Column

Some Definitions Related to Spherical Mirrors