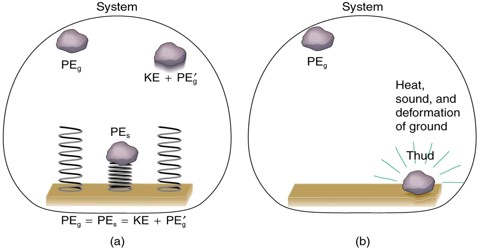 A force is said to be non-conservative if the work done by the force depends on the path along which the body moves. Work done by such a force over a round trip is not zero. Examples – Frictional force, viscous force etc.

(1) This force does not depend on the position only

(3) Work done by the non-conservative force cannot be regained completely.

(4) Non-conservative force does not follow the principle of conservation of mechanical energy. 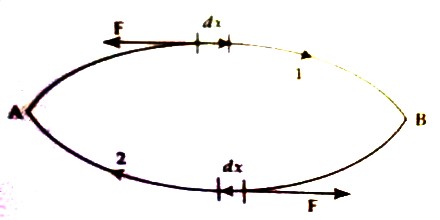 Total work done in taking the object through path 1 from A to B is the summation of all the small work done, i.e.,

Now, if the object is again taken from B to A along the path 2, the frictional force in this case also will act against the motion. So,

In both cases since work is done against frictional force, both work will be negative and their summation will not be zero.

According to the characteristics of conservative and non-conservative forces it can be shown that,

To raise a body to a height It against the gravitational force F the amount of work done = – Fh. Now, if it is released from that height to ground, then work done will be + Fh.

So, in raising a body to a height ‘h’ and in bringing back to the ground work done will be (— Fh + Fh = 0) zero. Hence, gravitational force is conservative. Similarly, electric force, magnetic force etc are conservative force.

What is Irreversible Process?