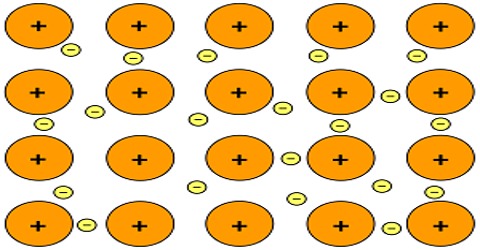 Generally metallic bond is observed in metals. Metal atom prefers to have maximum number of atoms around it. As distance between atoms is more, so this type of structure has relatively vacant spaces. Compared to ionic and covalent bonds this bond is weaker. For this the melting point of metal is less. High thermal and electrical conductivity, strong mechanical rigidity are some of the characteristics of metals. Valence electrons in metal can move freely due to the application of electric field, hence conductivity is more. For higher thermal conductivity, the free movements of these valence electrons are responsible. While bending a metal by applying external force ions in metal can easily accommodate.

Characteristics of metallic bonds are mentioned below: