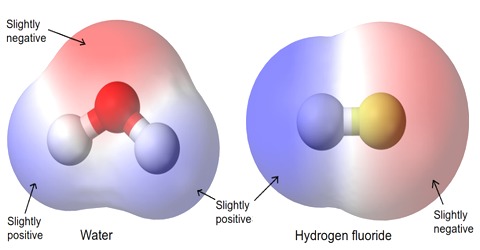 In liquid state, inter-atomic force between particles constituting the material is relatively small. For this, the particles do not remain solidly bond. But they remain close to each other in small cluster form. So, in liquid state a material has fixed volume. Among the particles there exists a small gap between particles, so within a fixed limit these particles can move. Because of this, although liquid has fixed volume but do not have fixed shape. It takes the shape of the container in which it is kept. In liquid state particles of the material vibrate, rotate and translate within limit. As the inter-particle gap is very small, so there is no remarkable contraction due to application of force on a liquid [Fig]. 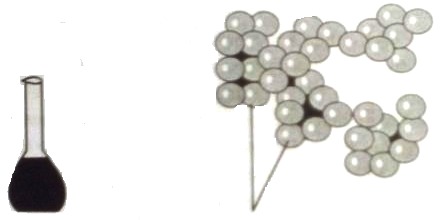 On the other hand, particles of a liquid above Absolute zero temperature vibrate and acquire kinetic energy for movement and like solid, kinetic energy increases much when the temperature increases. But it inter-atomic force and value of kinetic energy become close to each other the material remains in liquid state. In this state, the particles can move within a fixed area but cannot move away to an infinite distance. If the inter-particle distance is large the attractive force becomes less and if the distance is less the attractive force between partakes become more. But if the distance becomes less than a particular value, then repulsive force between particles originate.