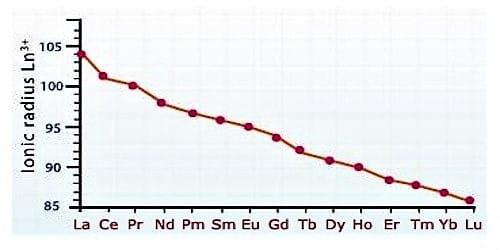 The atomic size or ionic radii of tri positive lanthanide ions decrease steadily from La to Lu due to increasing nuclear charge and electrons entering inner (n-2) f orbital. This steady decrease in the size with an increasing atomic number is called lanthanide contraction.

This Contraction describes the atomic radius trend that the Lanthanide series exhibit. It is a very important phenomenon in determining the characteristics of the elements of the lanthanide series.

Important consequences of lanthanide contraction are given below:

Following points will clearly depict the effect of lanthanide contraction:

(i) Atomic size (Basicity of Oxides and hydroxides):

(ii) Difficulty in the separation of lanthanides:

As there is an only small change in the ionic radii of Lanthanides, their chemical properties are similar. All elements of the lanthanide series have similar size without lanthanide contraction. This makes the separation of elements in the pure state difficult. So, it is very complicated to divide them. There is a regular decrease in their ionic radii.

(iii) Effect on the basic strength of hydroxides:

As the size of lanthanides decreases from La to Lu, the covalent character of the hydroxides increases and therefore their essential potency decreases. Thus, La (OH)3 is more basic and Lu(OH)3 is the least basic. A regular decrease in their tendency to act as a reducing agent, with an increase in atomic number.

Because of the smaller size but superior nuclear charge, tendency to form coordinate. The lanthanides have fewer tendencies to form complexes. The lanthanide ions have high charge and low charge compactness due to their big size. Complexes increases from La3+ to Lu3+.

Alcohols (C2H5 — OH) are Covalent Compounds why they Soluble in Water?