One of the spectacular atmospheric phenomena is the formation of rainbow during rainy days. The rainbow is also an example of dispersion of sunlight by the water drops in the atmosphere.

When sunlight falls on small water drops suspended in air during or after a rain, it suffers refraction, internal reflection and dispersion. 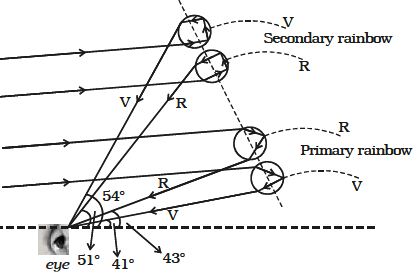 Figure shows the formation of primary rainbow. It is formed by the light from the Sun undergoing one internal reflection and two refractions and emerging at minimum deviation. It is however; found that the intensity of the red light is maximum at an angle of 43° and that of the violet rays at 41°. The other coloured arcs occur in between violet and red (due to other rain drops).

Define and Describe on Diffraction Grating