The polarization of transverse waves.

Let a rope AB be passed through two parallel vertical slits S1 and S2 placed close to each other. The rope is fixed at the end B. If the free end A of the rope is moved up and down perpendicular to its length, transverse waves are generated with vibrations parallel to the slit. These waves pass through both S1 and S2 without any change in their amplitude. But if S2 is made horizontal, the two slits are perpendicular to each other. Now, no vibrations will pass through S2 and amplitude of vibrations will become zero. i.e the portion S2B is without wave motion as shown in the figure. 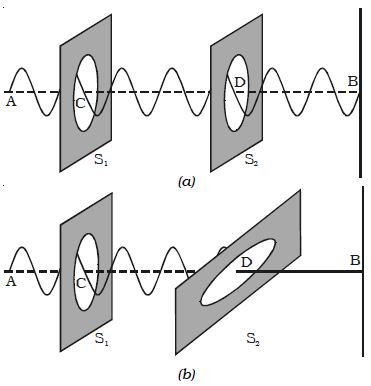 On the otherhand, if longitudinal waves are generated in the rope by moving the rope along forward and backward, the vibrations will pass through S1 and S2 irrespective of their positions.

A similar phenomenon has been observed in light when light passes through a tourmaline crystal. 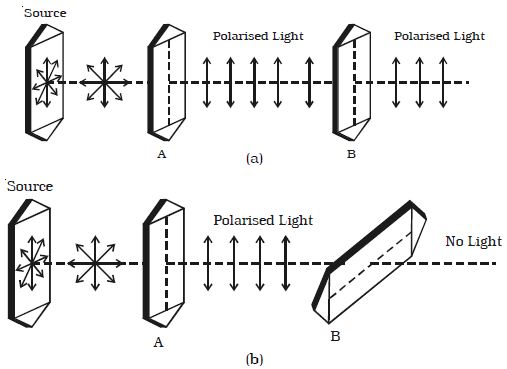 Light from the source is allowed to fall on a tourmaline crystal which is cut parallel to its optic axis (Figure: a).

If the crystal B is further rotated, the intensity of the light coming out of B gradually increases and is maximum again when their axis is parallel.

Comparing these observations with the mechanical analogue discussed earlier, it is concluded that the light waves are transverse in nature.

Define and Describe on Polaroids