The vertical section of a dorsiventral or dicotyledonous leaf through the lamina shows three main parts, namely; epidermis, mesophyll and vascular system. 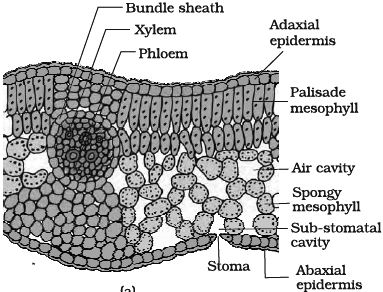 The epidermis which covers both the upper surface (adaxial epidermis) and the lower surface (abaxial epidermis) of the leaf has a conspicuous cuticle. The abaxial epidermis generally bears more stomata than the adaxial epidermis. The latter may even lack stomata. The tissue between the upper and the lower epidermis is called the mesophyll, Mesophyll, which possesses chloroplasts and carry out photosynthesis, is made up of parenchyma. It has two types of cells the palisade parenchyma and the spongy parenchyma. The adaxially placed palisade parenchyma is made up of elongated cells, which are arranged vertically and parallel to each other. The oval or round and loosely arranged spongy parenchyma is situated below the palisade cells and extends to the lower epidermis. There are numerous large spaces and air cavities between these cells.

Necessity of Osmosis in Plant Life