Bryophytes include the various mosses and liverworts that are found commonly growing in moist shaded areas in the hills (Figure). 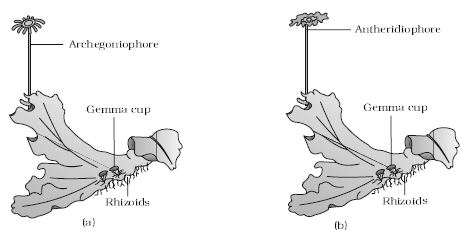 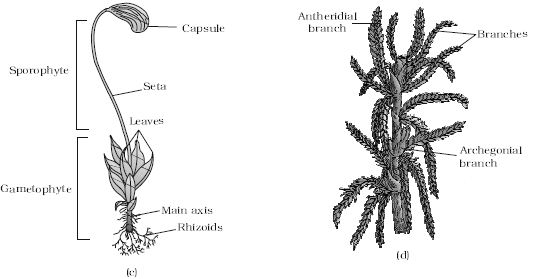 Bryophytes are also called amphibians of the plant kingdom because these plants can live in soil but are dependent on water for sexual reproduction. They usually occur in damp, humid and shaded localities. They play an important role in plant succession on bare rocks/soil.

The plant body of bryophytes is more differentiated than that of algae. It is thallus-like and prostrate or erect, and attached to the substratum by unicellular or multicellular rhizoids. They lack true roots, stem or leaves. They may possess root-like, leaf-like or stem-like structures. The math plant body of the bryophyte is haploid. It produces gametes, hence is called a gametophyte. The sex organs in bryophytes are multicellular.

The male sex organ is called antheridium. They produce biflagellate antherozoids. The female sex organ called archegonium is flask-shaped and produces a single egg. The antherozoids are released into water where they come in contact with archegonium. An antherczold fuses with the egg to produce the zygote. Zygotes do not undergo reduction division immediately. They produce a multicellular body called a sporophyte. The sporophyte is not free-living but attached to the photosynthetic gametophyte and derives nourishment from it. Some cells of the sporophyte undergo reduction division (meiosis) to produce haploid spores. These spores germinate to produce gametophyte.

Importance of the Osmosis is Plant Life

Define and Describe on Coelom