Home Biology Active Absorption of Water in Plants from Soil 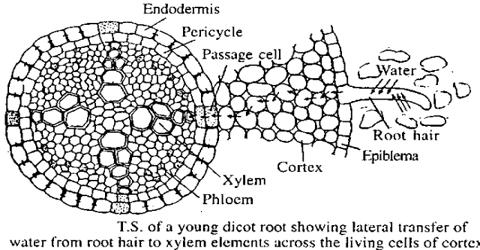 Aikens (1916) and Priestly (1921) mentioned about the role of osmosis in the process of absorption by root hairs According to them, absorption takes place due to the variation of osmotic pressure (O.P.) in between the capillary water and the root hair sap.

The process of Active absorption:

Following cell to cell Osmosis, water from the root hair reaches up to the endodermis passing through epidermal cells. Now, the flows of water occur through passage cells of the endodermis.

In this process, the cortex cells become turgid at one time by absorbing water and they again become flaccid when then water is transferred to the adjacent cells. These flaccid cells again become turgid by absorbing water. A pressure produced in the cells by gradually being flaccid and turgid due to osmosis is called Root pressure (R.P.). The water absorbed by osmosis enters the xylem vessels and from xylem vessels, it reaches the leaf by root pressure (R.P).