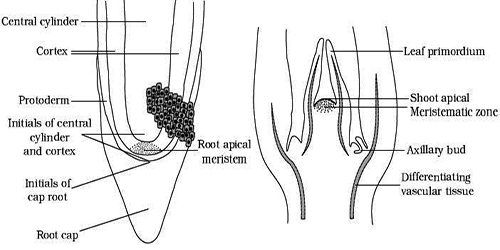 Growth in plants is largely restricted to specialized regions of active cell division called Meristematic Tissues. Plants have different kinds of meristems. The meristems which occur at the tips of roots and shoots and produce primary tissues are called apical meristems (Figure).

Following divisions of cells in both primary and as well as secondary meristems, the newly formed cells become structurally and functionally specialized and lose the ability to divide. Such cells are termed permanent or mature cells and constitute the permanent tissues. During the formation of the primary plant body, specific regions of the apical meristem produce dermal tissues, ground tissues and vascular tissues.

Effect of Light and Temperature on Plant Growth and Yield