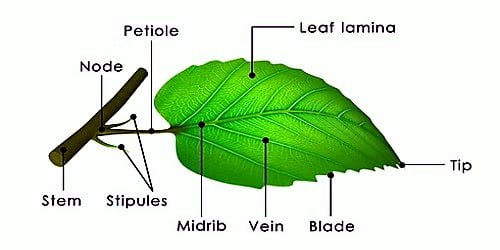 Different parts of the leaf

Observing a China Rose leaf will help us recognize its common parts: (1) Leaf base; (2) petiole and 3) Lamina or leaf blade. The Blade, or lamina, is the broad, flat part of the leaf. Photosynthesis occurs in the blade, which has many green food-making cells. This part of the leaf is attached to the stem or the branch. In some plants, a leaf-like growth arises from the side of the leaf base. These are stipules. This type of stipule is noticed at the leaf base of a pea.

The leaf-base often bears a pair of lateral appendages or out­growths called stipules. Some stipules, such as those of willows and definite cherry trees, create substances that avert insects from attacking the developing leaf.

The Petiole is the stemlike part of the leaf that joins the blade to the stem. This is the stalk which might fix the leaf to the stem; some leaves connect directly and don’t have petioles. Within a petiole are tiny tubes that connect with the veins in the blade. The petiole has little tubes, which attach the veins on the leaf blade to the stem. Some of the tubes hold water into the leaf. The cylinder-like part of a leaf is petiole. It connects the leaf base and lamina.  Leaves attached via a petiole are called ‘petiolate’, leaves which connect directly are called ’sessile’. In many trees and shrubs, the petioles bend in such a method that the blades accept the most daylight, thus assuring that few leaves are shaded by other leaves. The petiole of lotus, shapla, etc. are very long. The sial kanta leaf has no petiole.

Petiole helps position the leaf in such a way that it can gate sufficient sunlight. Moreover, its main function is to pass on the water and minerals produced in the stem to the leaf blade.

This is the major part of the leaf, also called the ‘blade’. It’s usually large and flat. The flat and extended green part next to the petiole is lamina. It is in this layer that photosynthesis occurs. The vein that runs from the tip of the petiole to the other end of the leaf blade is mid vein. From the midvein originates veins and vein inlets. The edge of the lamina is the leaf margin. The cells of the lamina, mainly those near the surface of the leaf, contain a high volume of chloroplasts, which carry out photosynthesis. Photosynthesis occurs in the blade, which has many green food-making cells.

Leaf-blades differ from one another in several ways: (1) the types of edges, (2) the patterns of the veins, and (3) the number of blades per leaf.  The lamina or leaf blade is the mainly conspicuous and essential part of the leaf. It is characterized by green color, thinness, and smoothness.

Smaller veins turn off from the midrib to make sure that the transportation organism of the plant extends to all parts of the leaf. The sections between the leaf veins are known as ‘inter-veinal’ areas.

Absorption of Minerals by the Plant

Describe on Functions of Stem