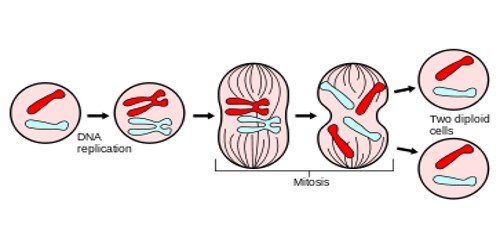 Mitosis is a procedure where a single cell divides into two identical daughter cells (cell division). It helps in increasing the number of cells in a living organism thereby playing a significant role in the growth of a living organism.

The significance of mitosis:

(4) Reproduction: In the Eukaryotic organism, reproduction occurs through this process. (Such as in Chlamydomonas)

(6) Repairing of Wounds: Any wounds or broken parts of the organisms can be repaired rapidly by mitosis.

(8) Keeping the size and shape constantly: By this division the definite shape and size of the cell remains constant.

(9) Healing of injuries: By producing new cells this process repairs the various types of damage of multicellular organisms.

(13) Asexual reproduction: Mitosis is used in the production of genetically similar offspring. For example budding of hydra and yeast, binary fission in amoeba, etc.

(14) Replacement and regeneration of new cells- Regeneration and replacement of worn-out and damaged tissues are a very important function of mitosis in living organisms. For example, the mitosis process is used in order to re-growth the legs of newts and crustaceans. However, the degree of re-growth may vary.

Other Significances of Mitosis