Hapliod spore is the first cell of gametophic generation. It’s performed by the following steps:

(a) Formation of prothallus:

Each spore (n) germinates in favorable condition and forms a 3-6 celled protonema like structure which eventually gives rise to a heart shaped prothallus through repeatedly mitosis division.

Antheridiurn (n): It s round shaped and gives rise to numerous sperms. 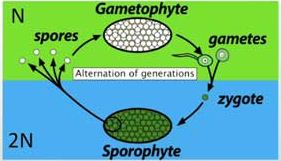 (i) The matured sperms come out breaking down the antheridium wall.

(ii) The multiflagellated sperms swim to archegonium but only a single sperm fertilizes the ovum (n) entering the venter through the neck canal.

From the above discussion, it is found that alternation of generation is performed clearly in the life cycle of a fern plant through the repetition of gametophytic (n) and sporophytic (2n) generation alternately with each other.

Draw a Labelled Diagram of Gametophyte of Moss