Each kidney of toad is formed by the combination of numerous fine coiled renal tubules. In each kidney, there are about two thousand such coiled microscopic tubules. These tubules are called nephrons. Each nephron is divided into two portions.

a) Malpighian body or organ

(A) Malpigbhian organ: It is the anterior rounded part of the nephron. This organ is again formed of two parts, such as Bowman’s capsule and Glomerulus. 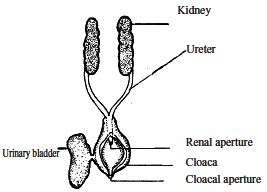 Ureter: From the outer end of each kidney a whitish elastic duct originates and goes towards the posterior part of the body. This duct is known as the ureter. The ureters of the two sides meet and form a common renal duct and open into the cloaca through a common renal aperture.

Cloaca: The cloaca is situated behind the rectum. It is a narrow chamber. The urinary bladder opens into the cloaca through the renal aperture. Through it, urine passes towards the cloacal aperture.

Cloacal aperture: The cloacal aperture is situated at the posterior end of the body. Through this aperture stool, urine, sperms and ova are discharged outside.