The blood vessels which carry the deoxygenated blood from various parts of the body to the heart are called veins. Veins originate from the capillaries. The only exception is the pulmonary vein. This vein carries oxygenated blood to the heart. The whole venous system of toad is generally divided into two main branches, such as:

Pulmonary Venous system: One pulmonary vein originates from each lung. The two pulmonary veins meet together and form one common pulmonary vein and finally it opens into. the left auricle. It is an exceptional vein which carries oxygenated blood from the lungs directly to the heart.

Systemic Venous system: Systemic venous system is formed by the veins which are originated from the capillaries carrying carbon-dioxide enriched blood to the heart directly. Three main vena cavae with their branches form the systemic venous system. The three vena cavae open in the three corners of sinus venosus. Two from anterior part of the body and the other from the posterior part carry deoxygenated blood. Each anterior vena cava or pre-caval vein is formed by three main veins, such as, External Jugular, Innominate and Subclavian vein. 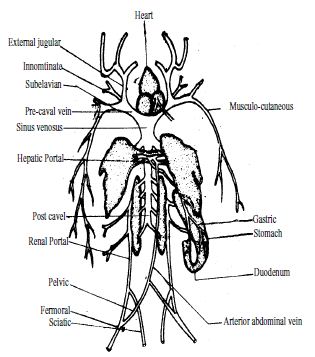