After the formation of ova in the ovaries of female toad, they pass towards the outer side through the oviducts. At this time the ova are surrounded or covered by albumin and take the shape of the transparent ribbon. Inside this ribbon-like part ova or eggs are arranged one after another in a row. In contact with water, this ribbon-like part swells and floats on water with eggs. In this condition union of sperm and ovum takes place. This union of sperm and ovum is called fertilization. The process of fertilization takes place in water outside the body of toad: This type of fertilization is called external fertilization.

Each sperm has a tail. When the sperm meets an ovum its tail is dropped. A zygote is formed when the ovum is fertilized by the sperm. Within a few hour of fertilization, the division of zygote begins. Zygote being divided by mitosis process forms an embryo. In this cell division at first, a cell divides into two. Then from two, the number of cells becomes four. Soon from four, the number increases at a rate of eight, sixteen, thirty-two, etc. This change of the zygote is called embryonic development. At this time the embryo passing through many stages or steps becomes transformed into a three-layered embryo. 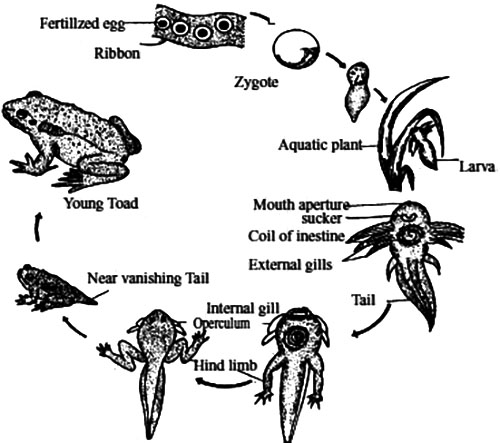 These three layers are Ectoderm, Mesoderm, and Endoderm.

(i) Ectoderm: The outer layer of the embryo is called ectoderm. This forms the integument, nervous system and sensory organs.

(iii) Endoderm: The innermost layer of the embryo is endoderm. It forms the epithelium of the alimentary canal, liver, lungs, pancreas and other organs.

Within two weeks of the fertilization, the formation of the embryo from zygote is completed and it comes out breaking the covering of the egg. This stage is called larva or tadpole. The tadpole looks like a fish fry. The body of a tadpole is divided into three parts, a rounded head, a small narrow trunk and a flat tail. On the ventral side of a tadpole and at the junction of the trunk and the tail the cloacal aperture is located. Initially, the tadpole does not have mouth aperture, limbs, and eyes. Instead of mouth aperture, there remains a sucker on one side of the mouth. With the help of this sucker, the tadpole keeps itself attached to algae or any other aquatic plants. At this time the tadpole does not take any food; lives by taking nutrition from the yolk of the egg. There remain three pairs of external gills on two sides of the head, with the help of gills the tadpole performs respiration. At the later stage, the mouth is formed at the side of the sucker. Fins are formed on the upper side of the tail in the form of folds.

External gills disappear and internal gills are formed inside the body: Coiled alimentary canal is seen indistinctly from the upper side of the body. In the meantime, strong jaws are formed in the anterior part of the head. The gills of tadpole remain covered by an operculum like the fish. Oxygen dissolved in water comes into contact with gills and respiration is performed.

Digestion in Duodenum of Toad

Structure of Toad’s Ovum and Sperm