Ultraviolet rays are of three types:

UV-A rays consist of long wavelength. Ultraviolt-B consist of medium wave length. And UV -C consist of short wave length. The ozone layer in the stratosphere zone prevents the total amount of the most dangerous UV -C and most part of less harmful UV -B. The rest amount UV -B is prevented from coming to the earth, by the troposphere zone and clouds.

Two American Scientists Maria Molina and Sherwood Ronald in 1974 AD first gave the idea that the chemical compound Chloro Fluoro Carbon (CFC) that is used in our daily life is responsible for the damage of ozone layer. CFC compound is used in the cans of Aerosol and in making of various foams. Getting release in to the atmosphere it moves to the higher atmospheric zone. The CFC compound does not break easily in the lower zone of the atmosphere. Reaching stratosphere CFC comes in contact with ultraviolet rays and releases chlorine after breaking itself. The free chlorine then acts as a catalyst and break the ozone molecule to an oxygen molecule and one oxygen atom. This process goes for years after years. Some other chemical compounds like Carbon Tetrachloride Trichloromethane and Helone also adversely affect the ozone layer. 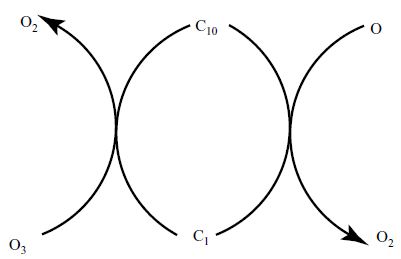 Fig: Breaking down of ozone molecule by Chloringe

Ultraviolet rays are harmful to living bodies. It is proved that an increased exposure to UV -A and UV -B resulting an enhanced possibility of skin cancer. Besides, various eye diseases like formation of cataract, distortion of eye-lenses, and lose of eye-sight found in aged people, are due to the effect of UV -B. Due to the reduction of the power of disease resistance, contaminations of various infectious diseases increased.

Major Plants and Animals of Upland in Bangladesh

Conservation of Endangered Plants and Animals