The gaseous layer that surrounds the earth from above the soil and water layer is the atmosphere. It is differentiated into three layers:

(i) Troposphere (adjacent to earth’s crust): Above the Earth’s crust this layer is extended from 10 K M. (at polar region; to 16 K.M. (at equator).

(ii) Stratosphere: Above the troposphere this layer is extended up to 80 K.M. from the Earth’s crust.

(iii) lonoshpere: Above the stratosphere and extended up to 3500 K.M. 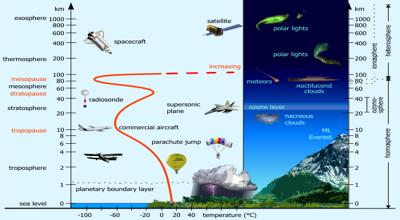 Fog mist, dust particles, clouds, and wind etc. are limited only in the Troposphere. In this layer the average ratio (depending on density) of different components are as follows: Nitrogen – 78%, Oxygen – 21%, Argon – 0.93%, Carbon dioxide – 0.03%, and a trace of water vapour, Methane, Helium and Krypton etc.

Beneath the Stratosphere (25 to 30 K.M. from Earth’s crust) there is a dense layer of Ozone. It is called Ozone barrier. This layer protects the life from the harmful effects of the radioactive waves particularly the Ultraviolet Rays of the Sun. The density of air in the ionosphere is very light. Due to the effect of the radioactive rays of the Sun the components of the air remain in ionic forms. The atmosphere protects life on Earth by absorbing ultraviolet solar radiation, warming the surface through heat retention and reducing temperature extremes between day and night.