Basidiomycetes Fungi are commonly known forms of basidiomycetes are mushrooms, bracket fungi or puffballs. They grow in soil, on logs and tree stumps and in living plant bodies as parasites. e.g., rusts and smuts. The mycelium is branched and septate. The asexual spores are generally not found, but vegetative reproduction by fragmentation is common. The sex organs are absent, but plasmogamy is brought about by fusion of two vegetative or somatic cells of different strains or genotypes. The resultant structure is dikaryotic which ultimately gives rise to basidium. Karyogamy and meiosis take place in the basidium producing four basidiospores. The basidiospores are exogenously produced on the basidium (pl.: basidia). The basidia are arranged in fruiting bodies called basidiocarps. 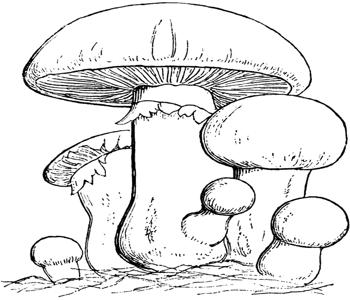