There is a type of vein in the body of the toad which originating from the capillaries of any organ instead of reaching the heart directly, again enters into other organs and terminates in the capillaries. These are called portal veins. The portal system is formed by the combination of such veins.

In the body of the toad, there are two kinds of the portal venous system such as Hepatic Portal System and Renal Portal System

Some veins coming from the stomach, intestine, pancreas, spleen and hind limb meet together and form this system. The two pelvic veins from the inner side of the femoral vein of each side of the hind limbs of a toad meet together and form the anterior abdominal vein. This vein approaches the liver. When nearing the liver, veins coming from various parts of the alimentary canal meets this vein. These joined veins are called hepatic portal veins. Hepatic portal veins then come in close contact of the liver and proceed transversely. The hepatic portal vein then divides into two branches and enters into two parts of the liver. There they divide into capillaries. 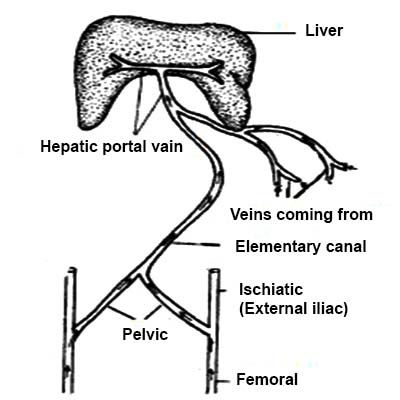 The femoral vein coming from the hind limb and the sciatic vein coming from the pelvic region meet together and approach towards the kidneys. This united vein is called renal portal vein. Before entering the kidney some other smaller veins also join. These are called dorso lumbar veins. Later the renal portal vein enters the kidney and divides into capillaries. The function of this system is to eliminate excretory materials from the blood collected by the kidneys. 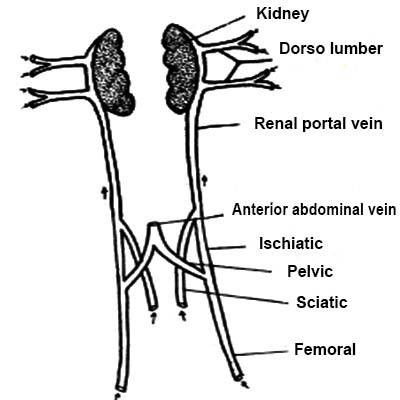 Transportation of Carbon Dioxide of Toad