The organs which form the female reproductive system of toad are: 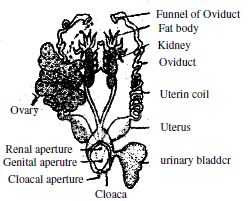 Ovary: The female toad has two ovaries. These are situated on the dorsal side of the abdominal cavity. They have no definite shape; they grow during the breeding season. Within the ovaries, innumerable ova are produced. Matured ova are black and spherical. At this time the two ovaries burst and the ova become scattered.

Oviduct: The toad has a pair of narrow, whitish, coiled oviducts. At the anterior end of each duct, there is a funnel and the posterior end widens to form the uterus. The ova enter the oviducts through the funnels.

Uterrus: The posterior part of each oviduct becomes dilated to form a sac-like structure. This is a uterus, where the ova remain stored temporarily. Later the two uteri meet together and open into the cloaca. The urine and ova of the female toad pass into the cloaca through two separate ducts. Later through the cloacal aperture, they are discharged from the body.