According to the nature of work, the peripheral nerves can be divided into three divisions, such as Sensory nerves, Motor nerves and Mixed nerves. 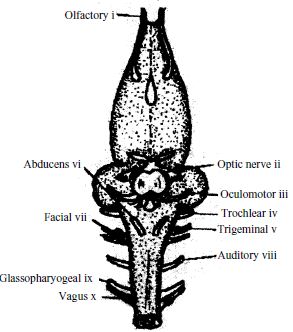 Sensory nerves: The nerves which carry stimuli from the peripheral organs of the body to the central nervous system are called sensory nerves. For example, the optic nerve of the eye, the olfactory nerve of the nasal aperture and auditory nerves of the internal ear.

The cranial nerves of toad originating from definite locations of the brain come out through the apertures of the skull and communicate with the various parts of the head.