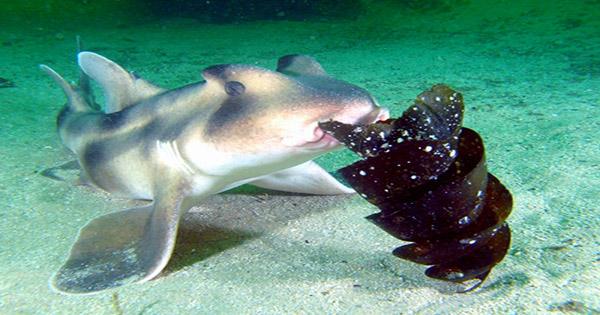 The birth of a newborn shark in a tank with only two female sharks recently startled aquarium staff in Italy. According to a post from the Cala Gonone Aquarium in Sardinia, the smooth-hound shark (Mustelus mustelus) was born earlier this month. The mother has spent over ten years in the aquarium in a big pelagic tank with only one other female of the same species, raising concerns about the newborn’s parental setup.

Could this be a smooth-hound messiah’s second coming? Or was it the work of a shady lothario shark that slipped into the tank late at night? Scientists at the aquarium say no way. They believe this “virgin birth” is the outcome of parthenogenesis, a unique reproductive method. Parthenogenesis, which is derived from the Greek words meaning “virgin birth,” is an asexual reproduction method in which an egg develops into an embryo without being fertilized by sperm.

Different animals accomplish this feat in different ways, but invertebrates, one of the most prevalent procedures involves the egg being fertilized by a polar body, a tiny cell that retains genetic material left over from egg cell creation.

Because of the shaky genetic base, the progeny are frequently deformed or die young. Despite these flaws, parthenogenesis can be a valuable last-ditch technique for females that are unable to procreate and pass on genetic material during the mating season. This type of reproduction is most common in plants and insects, but it has also been observed in a variety of animals, including anacondas, komodo dragons, rays, sharks, and even birds. However, no naturally occurring cases in wild mammals have been identified.

Ispera, which means “hope” in Sardinian, was the name given to the baby. They may be the first incidence of parthenogenesis in this species, according to the aquarium. They seek to prove it by analyzing the newborn’s DNA, which should disclose whether they are a true half-clone of the mother.

“It would thus be a scientific discovery of enormous interest,” Cala Gonone Aquarium wrote on Facebook, “since it might pave the way for studies targeted at validating how parthenogenesis is a mechanism that the [species] use even in nature.”