Sensory system does not have eyes but does possess light and touch sensitive organs (receptor cells) to distinguish the light intensities and to feel the vibrations in the ground. Worms have specialized chemoreceptors (taste receptors) which ‘tact to chemical stimuli. These sense organs are located on the anterior part of the worm. Earthworm is hermaphrodite (bisexual), i.e., testes and ovaries are present in the same individual (Figure). 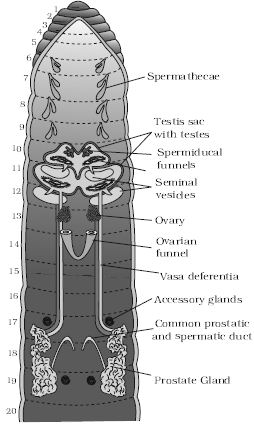 There are two pairs of testes present in the 10th and 11th segments. Their vasa deferentia run up to the 18th segment where they join the prostatic duct. Two pairs of accessory glands are present one pair each in the 17th and 19th segments. The common prostrate and spermatic duct (vary differential) opens to the exterior by a pair of male genital pores on the ventro- lateral side of the 18th segment. Four pairs of spermathecae are located in 6th-9th segments (one pair in each segment). They receive and store spermatozoa during copulation. One pair of ovaries is attached at the Inter-segmental septum of the 12th and 13th segments. Ovarian funnels are present beneath the ovaries which continue into oviduct, join together and open on the ventral side as a single median female genital pore on the 14th segment.

A mutual exchange of sperm occurs between two worms during mating. One worm has to find another worm and they mate juxtaposing opposite gonadal openings exchanging packets of sperms called spermatophores. Mature sperm and egg cells and nutritive fluid are deposited in cocoons produced by the gland cells of clitellum. Fertilization and development occur within the cocoons which are deposited in soil. The ova (eggs) are fertilized by the sperm cells within the cocoon which then slips off the worm and is deposited in or on the soil. The cocoon holds the worm embryos. After about 3 weeks, each cocoon produces two to twenty baby worms with an average of four. Earthworm’s development is direct, i.e., there is no larva formed.