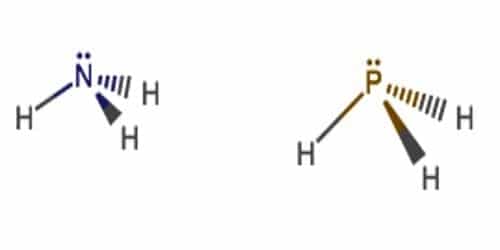 According to Lewis concept, we know that the substance which donates electron & accepts proton is known as base. Following, ammonia & phosphine both are basic compounds, because; nitrogen (N) of ammonia molecule, Phosphorus (P) of PH3 molecule contains one lone pair electron, which they can donate.

N & P are the elements of the same group but the size of N atom is smaller than that of P. For that reason, the electronegativity of nitrogen is more than that of P. So, ‘N’ attracts the electron of N-H bond towards itself. As a result, the density of electron in the ‘N’ atom is high. So it can donate an electron easily. So, its basicity is high.

On the other hand, in the case of phosphine, the electronegativity difference between P and H is less. So, P cannot attract the P-H bond electron towards itself. So, the density of electron in P is less. For that reason, it cannot donate electron so much easier like ‘N’. That’s why; ammonia is more basic than phosphine. So, Ammonia is a stronger base than phosphine because in ammonia the middle atom Nitrogen is lesser hence electron density is concentrated with in lesser range and simply accessible.

Bond disassociation energy of P-H bond is lesser than N-H bond due to a comparatively bigger size of P atom. N has a superior electronegativity and pulls the electrons in the N-H bonds in the direction of itself, creating an additional polar bond than the P-H bond.  This makes PH3 a better falling agent than NH3. N is lesser than P thus it is an enhanced lewis base, being able to structure more constant sigma bonds. It is because of lesser size of a nitrogen atom and larger electron mass on it as compared to the superior size of a phosphorus atom and smaller electron concentration on it. Both of these things cause NH3 to more eagerly take up a proton from the solution. Whereas in the case of phosphine the mass of phosphorous is huge electron cloud is distributed in huge part and not simply accessible.