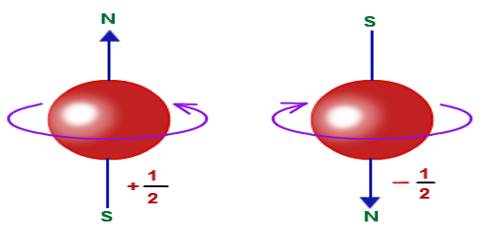 In 1821, Otto Stem and Walter Gerlach discovered magnetism due to electron spin. From the Stern-Gerlach experiment, an indication is obtained that an electron has a type of inherent angular momentum. Later on, in 1925, from Wolenback and Gaud Smith’s experiment, it has been proved that as there originates magnetic moment due to the rotation of a charged particle in an orbit, similarly an electron has also a magnetic dipole moment of finite value. Scientist Stephen Hawking started a hypothesis about the spin. According to him, spin is like a ball seen from different directions. For example- a particle having zero spin looks like a point because it looks same from all directions. Again, a particle having spin 1 looks like a unidirectional wire. It will look same if it is rotated by 360° i.e., after one complete rotation. Again a particle having spin 1/2 will look same after rotating by 7200 i.e., by two complete rotation. A body of span 2 looks like an arrow having two heads. Particle rotated by half of the complete rotation i.e., rotation by 180° look same as spin 2 [Figure].