Home Physics What is Series Circuit?

By arranging a cell E, two bulbs B1 and E1 one after another a series circuit is formed in figure. As there is a single path in the circuit, the same current will flow throughout the whole circuit. Now if the ammeter is connected at points A, B or C, the value of the electric current will found to be the same. 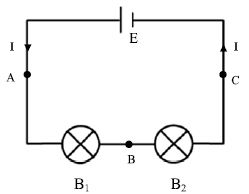 The little bulbs that are used for decoration purpose in wedding ceremony or in different programs are connected in series. We increase the voltage by connecting more than one battery in series in a torch light. The ammeter is connected in series to measure the electric current in a circuit.