For an infinite sheet of charge, the electric field will be perpendicular to the surface. Therefore only the ends of a cylindrical Gaussian surface will contribute to the electric flux. Suppose AB is the surface of a charged plane. Its charge density is σ. The electric field is to be determined for this charge. In this case, a cylindrical Gaussian surface perpendicular to the charge sheet is used. The resulting field is half that of a conductor at equilibrium with this surface charge density. 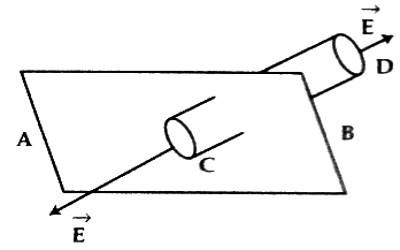 In vector form, we can write,

Here, ň is outward perpendicular unit vector on the given plane surface. It is seen from the equation (1) that the electric field due to the charged plane is independent of distance.

How to work Mutual Induction?