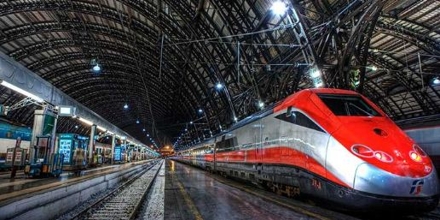 Absolute motion is motion that does not depend on anything external to the moving object for its existence or specific nature. When you go to college by walking through the road, you see many moving cars, cycles and many trees around you. In this case cars and cycles are in motion whereas trees are at rest. Again when you see vacuum cleaner cleaning the floor then distance and direction of every object around the cleaner change. That means with the passage of time position of the cleaner changes. Here we say that the vacuum cleaner is moving with respect to surrounding. When the position of an object changes with time with respect to the surroundings then the object is said to be in motion.

Whether a body is in motion or at rest is understood with reference to a reference frame. For example if a rickshaw is in motion with respect to a tree then the rickshaw is considered to be in motion. Again if the rickshaw and the car move in the same direction with same velocity then there will not be any change of distance between them. In this case one is considered in motion with respect to the other. Again if two friends talk sitting face to face in an aeroplane then with time there will not be any change of position between them. So it can be said that one is at rest with respect to the other. So it is seen that in order to determine whether a body is at rest or in motion a reference object is needed.

Whatever we see in the universe, moon, planet, satellite, earth all these are moving round the sun. So it can be said that all objects on earth are not at rest – all bodies are in motion. We try to know whether a body is at rest or in motion that we consider with respect to a body apparently at rest. It can be said “all rests in this universe are relative and all motions are relative. No motion is absolute, nor absolute any rest.”

Observe the following examples and see how positions of objects change with time.

(a) Standing on the platform a man saw a train moved away crossing him. So the train is in motion with respect to this man.

(b) Scientists have collected enough information about the rotation of the earth around the sun. That means, does not the motion of the train be determined by determining the motion of the earth? But the Sun is also not at rest. The whole universe is moving with tremendous speed through the galaxy. Again galaxies are in motion relative to each other. Actually all bodies in the universe are in motion. So it is impossible to determine absolute motion. Hence, it can be said, rest or motion of any body is always relative.