Home Physics Equation of Motion of a Horizontal Projectile 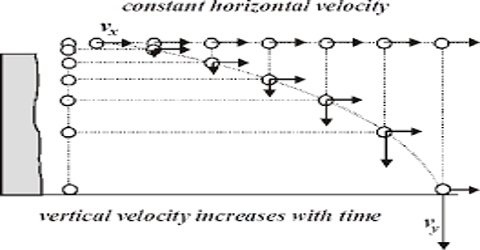 Equation of motion of a horizontal projectile

Let an object be thrown from a point O with velocity v0 along the horizontal direction [Figure]. If we ignore air resistance and consider g constant, then along the path of motion of the thrown object v0 will remain constant. Let after t sec the object reach at point P travelling distances x and y, respectively along horizontal and vertical directions. Now let the velocity at P be v. The horizontal and vertical components of v are respectively vx and vy. 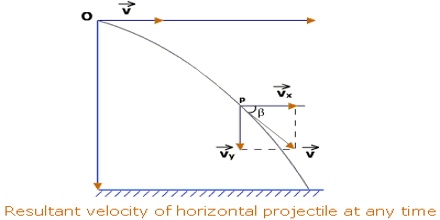 here angle θ in between v and horizontal direction, i.e., along X-asis,

Now, inserting the value of t from equation (1) in equation (2) we get,

This is an equation of parabola. So, trajectory of a body or a projectile ejected horizontally in resistant free-path forms a parabola.