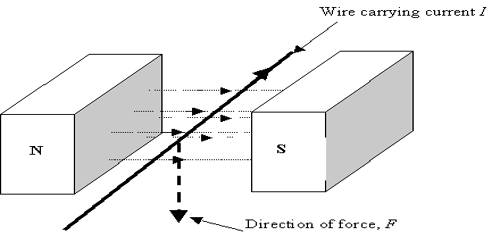 We know when current flow through a conductor magnetic field is produced. On a rectangular frame of aluminum, a thin insulated copper wire is wrapped many times to form a coil and is placed between the poles of a permanent horseshoe magnet NS and current are allowed to flow through the wire. This technique is used in moving coil galvanometers. Magnetic force and torque produced due to the flow of current in the coil placed in the magnetic field are discussed below:

Torque on a current carrying coil in magnetic field

and its vector form,

Here l→ is the displacement vector whose direction is along the direction of current in case of a straight wire.

If a loop of wire carving current is hung properly in a uniform magnetic field, then the magnetic force creates torque or torsional force on the loop which tends to rotate or turn the loop. This torque or torsional force is used to operate many different devices or instruments, e.g., galvanometer, electric motor, generator etc. Now we will derive the equation of torque for a rectangular loop of wire.

Let ABCD be a very small rectangular loop or coil carrying current placed in a uniform magnetic field B. The plane of the coil is in a parallel position to the magnetic field. The loop is attached to a shift or rod in such a way as it can rotate freely [Fig. a]. The resultant of the force acting on four arms AB, BC, CD, and DA will act as the net force in the loop. As the loop is rectangular, so

Let the current I flow clockwise. Now the force applied on the arm AB (according to equation (1)] is,

Again, the force acting on CD.

Since the forces acting on AB and CD are equal and opposite, so there will not be any displacement and as the line of action of the forces is in the same line, so no couple will be created. The force acting on the arm AD.

and the force on BC.

According to the right-hand rule, the forces acting on AD and BC will be opposite to each other and their line of action not being in the same straight line, the loop will experience a torque or torsional force; consequently, the loop will turn or rotate with respect to the rod. Now,

If a coil is made by wrapping N number of turns of a wire, then the force acting on each side of the coil will be N times that of a single loop and hence torque will also be N times. In that condition, net torque, τ = NIAB

If the plane of the coil makes an angle θ with the magnetic field i.e., the angle between b→ and B→ is θ [Fig. 2], then the distance between the forces,

In vector form, it can be written as,

That means the product of the current of a current carrying coil and the area of the coil is called the magnetic moment of that coil.

Determination of the direction at m→: