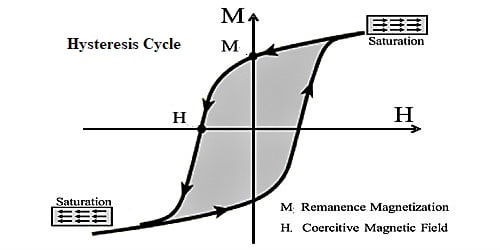 The cycle of Magnetization and Hysteresis 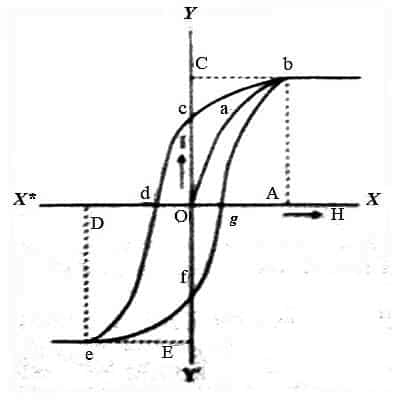 H versus I graph is called I-H graph. The graph is shown in Figure. We know that value of the intensity of magnetization I depend on the magma field intensity H. This is because that ‘I’ is created due to H. If the value of field intensity is charged in cyclic order an unusual behavior is observed which is shown in the figure. Scientist J. A. Euwong invented this phenomenon after many experiments. The graph of H versus I is called I-H graph. Magnetization curve is the relationship between altering the magnetic field and its pressure on the magnetic flux density. This curve has three regions. This is discussed below.

At saturation the value of ‘I’ is ‘OC’ and that of ‘H’ is ‘OA’. Under this situation, magnetic molecules of the magnetic substance remain aligned along a particular line.

Now, if the value of ‘H’ is decreased ‘I’ also start decreasing. But it does not come back to the initial point ‘O’. Then it follows the path ‘bc’. At point ‘c’ the value of ‘H’ becomes zero but ‘I’ is not zero. In this situation, some value of ‘I’ remains. It is shown by ‘Oc’ in the figure. This value of ‘I’ is called remanence and the ability of the magnetic material is called retentivity.

Again, if the value of ‘H’ is increased slowly in the positive direction, the value of ‘I’ also increases and following the path ‘efgb’ it reaches to the point ‘b’. After reaching ‘b’, it acquires the previous saturated value.