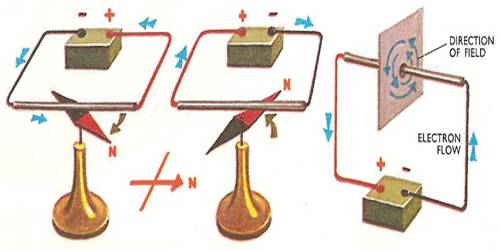 Oersted’s idea about the Magnetic field

The branch of physics that deals with the magnetic effect of current are called electromagnetism. In 1828, H. C. Oersted, a physicist of Denmark suddenly discovered that magnetic field is produced around a current carrying wire. He showed that a magnetic needle gets deflected near a wire when current is allowed to flow through the wire. This phenomenon can be described in the following experiments. Since scientist Oersted first performed this experiment, hence it is named as Oersted’s experiment.

In this experiment, there is a freely movable magnetic needle [Fig. (a)]. Slightly above it, a conducting wire is placed parallel to it. If the current is passed through the conductor, it will be seen that the magnetic needle is getting displaced from the central position and tends to align itself parallel to the wire. This happens due to combined effects of geomagnetic field and the magnetic field created by the flow of current [Fig. (b)]