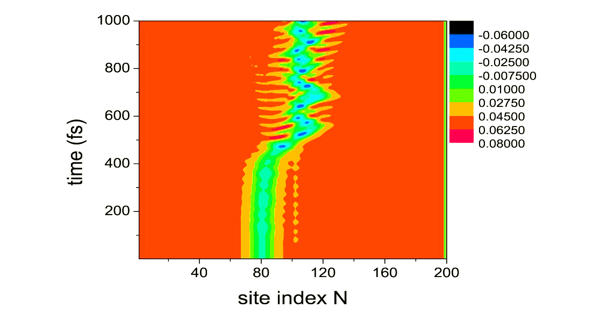 Polymer LEDs (PLEDs) are devices that contain single layers of luminescent polymers, closely packed between a pair of metal electrodes. New research published in EPJ B reveals that the higher-than-expected efficiency of PLEDs can be reached through interactions between triplet excitons, and impurities embedded in their polymer layers. PLEDs emit light as the metal layers inject electrons and holes into the polymer, forming distortions that can integrate to develop two diverse types of electron-hole pair—non-emitting “triplets” or ”light-emitting “singlets.”

Molecular dynamics simulations have shown that the mysteriously high efficiency of polymer LEDs arises from interactions between triplet excitons in their polymer chains and unpaired electrons in their molecular impurities.

Earlier theories have proposed that the ratio between these two types of electron-hole pair should be about 1:3, which would yield a light emission efficiency of 25%. They produce light as the metal layers inject electrons and holes into the polymer, creating distortions which can combine to form two different types of electron-hole pair: either light-emitting ‘singlets,’ or non-emitting ‘triplets.’ But subsequent experiments revealed that the actual value can be as much as 83%.

In new research published in EPJ B, physicists in China, led by Yadong Wang at Hebei North University, found that this higher-than-expected efficiency can be reached through interactions between triplet excitons, and impurities embedded in the polymer. Due to their commercial and scientific advantage, PLEDs are becoming a more and more popular area of research.

Within PLED polymer layers, excitons are known to be produced through the recombination of ‘polarons’ — distortions in electrical charges which form and disappear as electrons move through solid materials. Within the layers of PLED polymer, excitons are said to be formed by the recombination of “polarons”—that is, distortions in electrical charges which appear and disappear as electrons travel via solid materials. However, other mechanisms must also be involved to explain why their luminescence efficiencies are so much higher than previous theories predicted. One proposal recommends that their optical and electrical properties of PLEDs are greatly influenced by unpaired electrons caught inside molecular impurities.

Wang and colleagues explored this idea through molecular dynamics simulations, which allowed them to recreate collisions between a non-emitting triplet exciton in a polymer chain, and an unpaired impurity electron. Their calculations revealed that light-emitting singlet excitons are among the main products of this reaction; with their overall proportion varying with the size of the impurity, and its degree of coupling with the polymer chain. The result provides decisive proof for the first time that impurities can considerably improve the efficiency of PLEDs, and provides new clues regarding the molecular mechanisms involved.