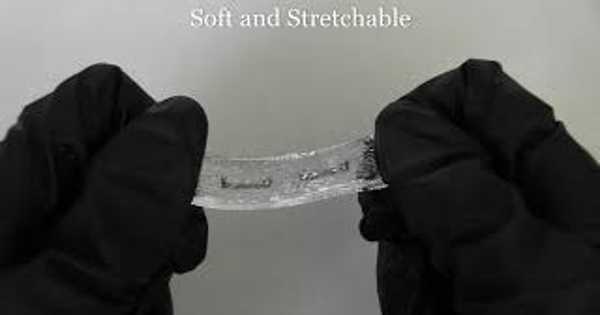 In a turbine generator, a moving fluid—water, steam, combustion gases, or air—pushes a series of blades mounted on a rotor shaft. The force of the fluid on the blades spins/rotates the rotor shaft of a generator. In turn, the generator converts the rotor’s mechanical (kinetic) energy to electrical energy. North Carolina State University researchers have developed a soft, stretchable device that converts movement into electricity and works in both dry and wet environments.

“Mechanical energy is abundant,” says Michael Dickey, Camille & Henry Dreyfus Professor of Chemical and Biomolecular Engineering at NC State and corresponding author of a paper on the work. “We developed a device that can convert mechanical motion into electrical current. One of its most impressive features is that it works flawlessly underwater.”

The energy harvester’s heart is a liquid metal alloy of gallium and indium. The alloy is encased in a hydrogel, which is a soft, elastic polymer that has been swollen with water. Ions are dissolved salts in the water in the hydrogel. Ions assemble on the metal’s surface, causing charge to be induced in the metal. Increasing the surface area of the metal provides more surface area for a charge to attract. This produces electricity, which is collected by a wire connected to the device.

Researchers have created a soft, stretchable device that converts movement into electricity and works in both dry and wet environments.

“Because the device is soft, any mechanical motion, including squishing, stretching, and twisting, can cause it to deform,” Dickey explains. “As a result, it is adaptable for harvesting mechanical energy. The hydrogel, for example, is elastic enough to be stretched five times its original length.”

Experiments revealed that deforming the device by a few millimeters generates a power density of about 0.5 mW m-2. This amount of electricity is comparable to a number of popular energy harvesting technologies.

The water in the hydrogel contains salt ions, which accumulate on the metal’s surface and can induce a charge in the metal. The greater the charge that attracts the surface, the larger the area of the metal. A wire connected to the device captures the generated electrical energy. Because the device is soft, any mechanical movement can deform it. As a result, it is applicable to the collection of mechanical energy. The hydrogel has enough elasticity to stretch up to five times its original length.

In experiments, the researchers discovered that deforming the device by a few millimeters produces an energy density of around 0.5mW/m2, which is comparable to other energy recovery technologies that either do not work well or do not work at all in a humid environment. This one-of-a-kind feature will allow for applications ranging from biomedical devices to sportswear to the marine environment. Furthermore, the device’s production is straightforward.

“However, other technologies perform poorly, if at all, in wet environments,” Dickey says. “This one-of-a-kind feature could enable applications ranging from biomedical settings to athletic wear to marine environments.” Furthermore, the device is simple to construct.” Because there is a way to increase the power, we consider this work to be a proof-of-concept demonstration.”

The researchers are already working on two related projects. One project aims to use the technology to power wearable devices by increasing the power output of the harvester. The second project looks at how this technology can be used to harvest wave power from the ocean.

Two related projects have already been launched by scientists. After increasing the collector’s power, one focuses on using technology to power wearables. The second project looks at how this technology might be used to harvest wave energy in the ocean. The findings were published in the journal Advanced Materials.

The research was carried out with the assistance of NC State’s ASSIST Center, which is funded by the National Science Foundation under grant EEC-1160483. The Coastal Studies Institute of North Carolina provided additional funding, as did the Korea Institute for Advancement of Technology’s Fostering Global Talents for Innovative Growth Program.